In this IMG activity, you set how orders that are created, changed, or deleted during SNP planning, are transferred to an OLTP system. The following options are available:

You can also exclude certain types of orders from transfer, such as SNP stock transfers where no source location exists.

For the processes of aggregated planning and planning with aggregated resources, you can define which orders you want to be transferred that were created at the different levels of a location product hierarchy. The default value is that only the orders for the sub products (suborders) are transferred.

In addition, it is still possible to choose between a Vendor Managed Inventory (VMI) scenario and a non-VMI scenario.

If you have specified that you want deployment stock transfers to be transferred as stock transport orders to the OLTP system, they cannot be planned again or changed.

Note that the settings you make in the CIF transaction User Settings, can overwrite the settings made here. The following rules are valid:

If you set No transfer in this SNP IMG activity, the orders are not transferred, even if another setting has been made in the CIF transaction.

Email ThisBlogThis!Share to TwitterShare to FacebookShare to Pinterest
Labels: SNP

How to delete material master in APO?

How to delete Material master in APO? (I have material and location)?
How do we delete the transaction data and dependent master data?

This is not a plain thing to delete a product master/location product in a production system.

You have to carry out the following steps:

a) Remove product from integration model

b) Delete all orders for this product-location which still exist in the APO system by running the reports /SAPAPO/RLCDELETE or /SAPAPO/DELETE_PP_ORDER (this report is not recommanded to be used in product system!!) or transactions /SAPAPO/RRP4 or /SAPAPO/RRP4.

d) Delete the product from ATP tables by running the report /SAPAPO/SDORDER_DEL with the selection according to the product being deleted.

f) Delete the product from all PPMs through the transaction /SAPAPO/SCC05;

h) Remove the product from transportation lanes through the transaction /SAPAPO/SCC_TL1 or /SAPAPO/SCE; Note: If the lane was created with option 'All products', you should not care about this condition.

i) Remove the product from quota arrangement through the transaction /SAPAP/SCC_TQ1;

l) Remove the product from RTO;

a) In transaction /SAPAPO/MAT1, select the product (and location in case of location product);

c) In the popup 'Set deletion Flag' set a flag in the appropriate field: Leave the field 'Product' empty unless you want to delete the product master, i.e. in case a location product must be deleted, the flag has to be set on location only;

d) The deletion can be executed directly or be scheduled for another time.

Source: http://www.sap-img.com/apo/deleting-material-master-in-apo.htm
Posted by Hai Zeng at 11:48 PM No comments:

During an ATP check in SCM with product allocation as one of the step in basic methods, bad performance or response time is too high. This is due to the number of characteristic combinations to be checked during the allocation check.

- The number of characteristic combinations.
- Check if setting direct connection to planning area is defined in product allocation group.

You can normally display the incoming orders quantity in the planning tool (for example, Demand Planning) together with the product allocation quantity. It should not be manually changeable there.

If the incoming orders quantity was manually reduced (or not fully updated), this may result in an overconfirmation when you change the document during the repeated availability check.

The characteristics directory is used to assign the product allocation time series to the planning time series when you transfer or copy the time series from the Demand Planning.

You can use the report to compare (and, if necessary, to correct) the product allocation assignment and the incoming orders quantity.
The sum of the product allocation assignments of a period is generally equal to the incoming orders quantity in the time series.
You can use the report to check (and, if necessary, correct) this consistency under different aspects. You have the following options:

To correct the incorrect periods, you must select all periods of a time series. Use the 'Combine product allocation assignment' function ('Goto' in the menu, or the button) to flag the selected time series for repair.

Then use the 'Execute' function to start repairing the flagged time series.
The system asks:

The display and functions are identical to those in 'Assignment without incoming orders quantity'.

This situation may occur if the order documents are incompletely deleted (for example, due to notes being incompletely imported) or already archived.

There are two different options for the repair (the deletion):

The product allocation quantity assigned up to now remains assigned and cannot be used by other documents. If the items were archived, this procedure is correct.

The entries selected for repair are flagged with one of these two functions. You can then use the 'Execute' function to start deleting these characteristics combinations or to repair the affected time series.
As described above, the system asks you whether you want to add the product allocation assignment of inactive time series for the incoming orders quantity of the more general collective product allocation time series.

The system displays all product allocation assignments that:

As described above, the characteristics combinations that you want to delete can be selected and then flagged for deletion (menu 'Goto'). You can then use the 'execute' function to delete the product allocation assignments.

You can only use manual entries or actions to execute the report described here. In the case of large product allocation groups, the runtime of an online transaction may be insufficient to execute the report.
You can also use transaction /SAPAPO/ATPQ_KCGRP_U to carry out the time series comparison (as described under 'Assignment without incoming orders quantity').
In this case, the incoming orders quantity is always set to the total of the product allocation assignment of a period (that is, the yellow and the red traffic lights of the above display disappear). You can restrict the area to be corrected to a period of the time series. 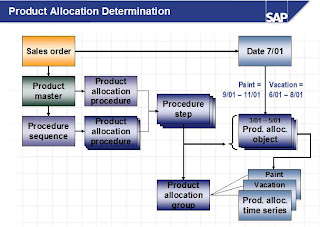 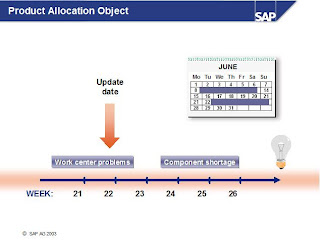 Objects are always valid from the end date of the last object. To switch off the product allocation for a certain period, you have to define a dummy object and set it to inactive.

You can maintain time-dependent conversion factors for your product allocation objects in Customizing.

Elements of the Check Against Product Allocations 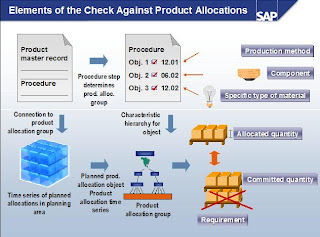 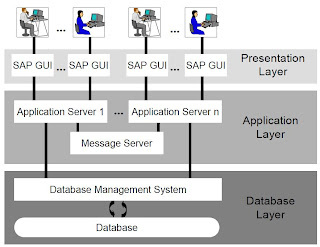 The kernel and basis services component is a runtime environment for all R/3 applications that is hardware-, operating system- and database-specific. It is written in C and C++ and some ABAP.

Database: The applications do not communicate directly with the database. Instead, they use Basis services.

ABAP workbench is written in ABAP.

The message server is responsible for communication between the application
servers. It passes requests from one application server to another within the system.

Software layer distribution:
A common configuration is to run the database system and a single application server (containing special database services) on one host, and to run each further application server on its own host. The presentation layer components usually run on the desktop computers of the users.

Dispatcher
Each application server contains a dispatcher. The dispatcher is the link between the work processes and the users logged onto the application server. Its task is to receive requests for dialog steps from the SAPgui and direct them to a free work process. In the same way, it directs screen output resulting from the dialog step back to the appropriate user.

Gateway
Each application server contains a gateway. This is the interface for the R/3 communication protocols (RFC, CPI/C). It can communicate with other application servers in the same R/3 System, with other R/3 Systems, with R/2 Systems, or with non-SAP systems.
The fact that the individual work processes work independently makes them suitable for a multi-procecssor architecuture

A mapping process projects the required context for a dialog step from shared
memory into the address of the relevant work process. This reduces the actual copying to a minimum.
Local buffering of data in the shared memory of the application server reduces the number of database reads required. This reduces access times for application programs considerably.

The SAP programming model contains a seies of bundling techniques that allow you to group database updates together in logical units. The section of an R/3 application program that bundles a set of logically-associated database operations is called an SAP LUW. Unlike a database LUW, a SAP LUW includes all of the dialog steps in a logical unit, including the database update.

An R/3 System is distributed across more than one application server, the data in the various buffers is synchronized at set intervals by the buffer management. When buffering the database, you must remember that data in the buffer is not always up to date. For this reason, you should only use the buffer for data which does not
often change.

Update Work Process
Update work processes execute database update requests. Update requests are part of an SAP LUW that bundle the database operations resulting from the dialog in a database LUW for processing in the background.

One application server may, of course, have more than one function. For example, it may be both a dialog server and the enqueue server, if it has several dialog work processes and an enqueue work process.

You can use the system administration functions to switch a work process between dialog and background modes while the system is still running. This allows you, for example, to switch an R/3 System between day and night operation, where you have more dialog than background work processes during the day, and the other way around during the night.
Posted by Hai Zeng at 6:17 PM No comments: